Thursday o6 November 2008 | Today I'm going to write in English, as I have organised an English Conversation Session at Le Comptoir. I was in Orly during the day, and everything went smooth there. When I arrived at 8:00 AM, the airport was covered with very thick fog, giving a ghost-like appearance to people smoking outside and a phantasmagorical look to the buildings. Weather cleared up after a while. At 4:30  PM I left the airport and took the OrlyBus heading for Denfert; I had planned to quickly meet up with my brother in the Indiana Café and then planned to go and pick up a 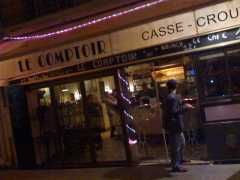 parcel at a laundry located not far from Denfert. But I ended up spending more time than I though in the Indiana Café, because my brother had invited our Parisian aunt to join us. Needless to say, I was very happy to see them both, but that resulted in my not having enough time to pick up my parcel before heading for Le Comptoir. I just could not afford to be late, as I was the one who organised this English Conversation Session. Consequently, I took the Métro Line 6, got a connection at Pasteur, and arrived a little early at Le Comptoir, where one person had already showed up. There were 6 or 7 of us, discussing in a friendly way in English, in a relaxed atmosphere. At 9:00 PM, I left the place and walked westbound to meet up my girlfriend at her place, after she also had quite a long and exhausting day. I finally got home around 1:30 AM, and I had got up at 6:30 AM the day before! Good thing I could have a little nap in my Resource Centre in Orly; I will finish the week quite knackered, but this is another story... Except a little frustation regarding the non collection of my parcel, I had a very nice day. I think I will launch another Conversation Session before the end of the year, due to popular demand.